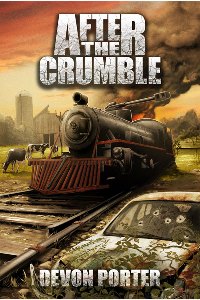 Buy After the Crumble on Amazon.

Buy After the Crumble for Kindle.

Buy After the Crumble for Nook.

Buy the After the Crumble audio book.

Our future has crumbled. In the late 2020s, the grid finally flickered out for the last time, succumbing to attacks from a newly formed Resistance, fuel scarcity, and general entropy.

It is now the year 2037 and many have died, with the few that managed to escape death solely concerned with their daily survival. Gavin Collier is one of those lucky few, but survival alone isn’t enough for him anymore. Recognizing that the meaning of life didn’t crumble along with the rest of the world, he embarks on a dangerous and personal journey for reasons that few can understand. After leaving his home for the first time in years, Gavin must commit murder in order to save his life, only surviving through good luck and sheer force of will.

The series of events that follow will alter Gavin’s life forever. He finds true love for the first time, and when his love makes the journey to join Gavin at his family farm, the violence and evil of the outside world follows her there. Renewed by hope and the power of love, Gavin will do whatever it takes to protect his future wife and the remaining members of his beloved family, as the dangerous forces close in on his cherished farm and small community.

Gavin’s family had been surviving with little help from the outside world, but now they must come together with their neighbors to fight for their land and those they love. Personalities clash, lives are lost, and fear is inescapable. They all must struggle to keep their humanity in this new, brutal world. Gavin knows that they must prevail at all costs, and keep the flames of freedom and faith burning during one of humanity’s darkest times. Doing so is the only way to make life worth living, and worth something more than just survival.